Now things are getting back to normal, Nicola is starting to be seen at more press launches.

Last week she was seen at The Launch Of Van Gogh: The Immersive Experience At The Truman Brewery.

You can view photos of her in our gallery: https://nicolarobertsmedia.com/gallery/thumbnails.php?album=910

On Thursday, she was seen in the West End to watch The Constellations.

You can view photos of her in our gallery: https://nicolarobertsmedia.com/gallery/thumbnails.php?album=911

You have to be registered to see the photos, its free! xoxo

If you enjoy the content, please consider buying me a coffee!

Nicola Roberts says she refused the government’s request to endorse its Online Safety Bill, due to “loopholes” in the legislation.

The singer said was asked to “champion” the bill after suffering abuse, harassment and online stalking.

But she said the draft bill does not do enough to stop people who’ve been banned from setting up new accounts.

The government said the legislation would tackle anonymous accounts without imposing a “blanket ban” on anonymity.

“I am unconcerned with chasing the rabbit,” she said in a statement. “I would rather just fill the hole.”

Roberts said she had been invited to discuss the bill by the Department for Digital, Culture, Media and Sport (DCMS) two weeks ago.

Although the meeting was private, she said the racist abuse aimed at Marcus Rashford, Jadon Sancho and Bukayo Saka after Sunday’s Euro 2020 final on Sunday strengthened her conviction that the legislation needed to be tougher.

“The online racism we have seen since last night’s England game targeted at, in particular, a 19-year-old is despicable,” she said.

“Regardless of whether an abuser’s account is blocked or taken down, perpetrators make the time to start another and start again. It highlights why those loopholes need to be filled and this has to stop!”

In response, a DCMS spokesperson said anonymous accounts were important for certain groups of people, including those “exploring their sexuality or suffering domestic abuse”.

However, they added, the proposed bill would force social media companies to meet a duty of care, “which will mean stopping repeat offenders from opening new accounts and working with the authorities to make it easier to find people who set up accounts anonymously to abuse others”.

Roberts said she was asked to lend her support, alongside other public figures, in the hope of the bill becoming law.

However, after reading the draft legislation, she explained she “couldn’t support the bill until something more concrete was developed”.

“It would be unproductive and a slap in the face for me to support something that ultimately was still contributing to countless people experiencing abuse online,” she added.

The singer, who won the first series of The Masked Singer last year, urged fans to write to their MPs demanding a tougher solution.

“It’s not the overall fix in combating why people are hateful,” she said. “But it’s a piece of the puzzle that helps keep people safer online.”

A plethora of celebrities came together to support the vaccine drive through song!

The group performs “The Rhythm of Life” from iconic musical Sweet Charity, Rourke’s final production as artistic director of the Donmar Warehouse.

Watch the video below to see Nicola in action (Those vocals <3), and if you havn't already, go book a vaccine! 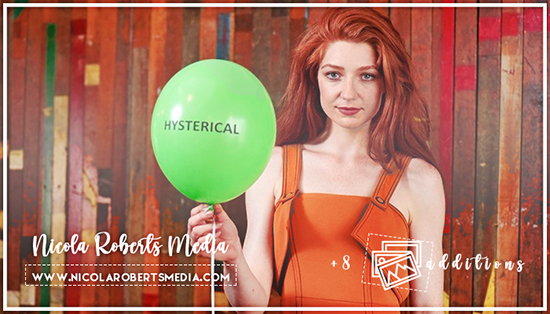 In 2016, Nicola fronted a Kellogs Special K Campaign as part of their ‘Strength Is’ motto.

As an ambassador, she sat down with other women to discuss the Top 20 most hated pet names for women.

“It is a strange thing that in a modern society we still have room for language that holds strong women back. “It is very important young women in society grow up learning that you are not a ‘ball-breaker’ if you are successful – you are simply a strong woman succeeding. “Or don’t allow themselves to be referred to as anything other than who they are in a professional setting.”


I’ve added 8 photos in the gallery from this campaign and also a video in the archive, click the links below.

xoxo If you enjoy the content, please consider buying me a coffee!

I know that this is ‘old news’ as such, but i really wanted to post about it, as i love it so much!

Back in February, Nicola shared her cover version of Lewis Capaldi’s Someone You Loved.

You may remember that she sang this on The Masked Singer final in 2020.

More of this please Nicola, and of course a new album? 🙏

Hi everyone, welcome to your brand new Nicola fansite! 👋

My name is Hayley and I’m sure we may have crossed paths before, from my other GA fansites (as seen in the sidebar!)

My only ask is you support the site, either by liking our tweets/instagram and maybe even feedback once in a while, so i know that this fansite was worth the time in building. I have a full time job as well as a new house so as you can imagine, time is tight, but I know Nicola deserves a fansite!

I used to have a fansite for her many years ago which some of you may remember, called Nicola Roberts UK. Unfortunately it got deleted by the paid host, and i couldn’t recover it.

Now we move on to NRM – and lets all enjoy our talented girl together, and build a much needed fan community.

I hope you enjoy all the content that I will be bringing to you all, and lets cross our fingers for new Nicola projects soon 🤞

If you enjoy the content, please consider buying me a coffee!