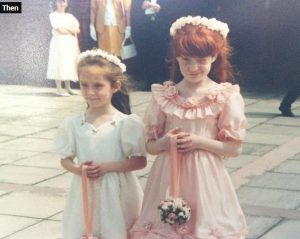 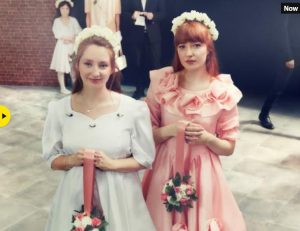 Born in Stamford, Lincolnshire in 1985, Nicola Roberts is the eldest of four children and the youngest member of Girls Aloud. Finding fame at 16 as a competitor in TV talent show Popstars: The Rivals, she and the group went on to score some of the biggest hits of the 00s, with 21 Top 10 singles and four No 1s. She later released an acclaimed solo album, 2011’s Cinderella’s Eyes, and has performed in London’s West End and written songs for other artists. Roberts supports the Recycle Your Electricals campaign.

Frankie (on left)
This was taken at our auntie and uncle’s wedding. Nicola and I were quite showy as kids; we liked the attention. But when it came to family events, we wanted to dress up then go home – do it all on our own terms. That’s why we look so done.

Nicola and I were inseparable growing up. When our brothers arrived we were like mother hens – having to change nappies and feed them bottles. We’d be silly, too – at meal times we’d pretend we were in a restaurant and we’d host our own TV shows.

While Nicola and I have never properly fallen out, we fought a lot as kids. Ball-of-rage fistfights. There would be props involved: pans, picture frames, plugs, Hoovers – hot water was a thing at one point. Nicola was vindictive with it. Once we had an argument, probably about something stupid like me moving her Pot Noodle, and instead of getting me right away, she bided her time. She said she’d wash my hair before bed and when it was time to do it she scalded me.

I was 13 when she signed up for Popstars: The Rivals. We were just these little kids who lived in the northwest – and I didn’t really understand what was going on. Our family were at a holiday camp in Devon when Nicola had to go to the auditions. Every day Dad would come off the phone and say, “She got through!” and I’d be like, “Oh great”, not knowing what a big deal it was. We’d take trips to London, 14 of us in a minibus, watch her perform, then I’d be back home the next day, hanging out with my friends on the street.

Although our local community got behind her – there were banners on roundabouts saying “Vote Nicola” – the older girls I’d run into were jealous of her and mean to me. There were pockets of real resentment. I tried to fight them and always knew how to stand up for myself, even though they were six years older. They weren’t going to do anything.

Whenever Nicola and I would spend time together, we’d always do new fun things. She made her world feel normal for me, even though she was on TV. I loved going to photoshoots with her or shopping and thinking, “I’m going to get all these things that I don’t need!” Fame became just another version of our life together.

That said, it’s hard having a sister in the public domain. I was so young when Nicola faced a lot of criticism in the press, the sort of things you should never say about somebody, especially not a teenage girl. Looking back, it’s really hard to know that someone you love, someone so beautiful, could have been seen in a negative way.

Nicola and I were close then, but we are fiercely close now. She doesn’t even need to speak and I’ll know what she’s thinking or what she might need. It’s us against the world – but then it’s always been that way.

Nicola
We’re from quite a big family. My mum is one of six, my dad is one of four and they all had four or five kids each, so we were always at weddings, communions and christenings. This was before the time of straightening irons, so the night before we’d have put our hair in cotton rags. We’d wake up with ringlets, get dressed, go to the wedding and sit there bored while Mum took her 500th photograph of the day.